Spider-Man is an action-adventure video game based on the Marvel Comics comic book series The Amazing Spider-Man, which features the fictional superhero Spider-Man. The game follows Spider-Man as he is framed by a doppleganger for stealing a device created by a supposedly reformed Dr.

Spider-Man is an action-adventure video game based on the Marvel Comics comic book series The Amazing Spider-Man, which features the fictional superhero Spider-Man. The game has the player controlling Spider-Man as he goes through each level, either trying to reach the exit or complete a certain objective. The player must retry the current level if Spider-Man runs out of health, falls off a building or fails to complete certain objectives such as rescuing a hostage. Spider-Man is able to utilize his spider powers to traverse the environments, being able to crawl on walls and ceilings, swing short distances and instantly zip between certain points. In combat, Spider-Man can utilize a limited supply of web-cartridges to attack his enemies, either webbing them up to stall or defeat them, increasing the strength of his attacks or forming an explosive barrier. Spider-Man can also find comics, which unlock a Spider-Man comic book issue cover in the menu screen, as well as power-ups such as Spider-Armor which temporarily increases his strength and defense, and Fire Webbing which is effective against symbiotes. 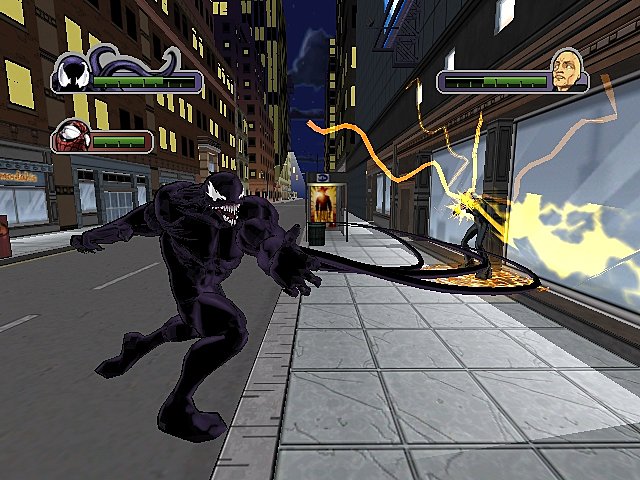