K.I.T.T. (short for Knight Industries Two Thousand) is the fictive name for the highly modified Pontiac Trans-Am which has a mind, and a series, of his own. For eighty-four episodes, K.I.T.T. and Michael fight against crime, a battle which completely destroys 'the black beauty' four times. If you think you can do better yourself then this game is the chance to prove it.

As many of you will without a doubt remember, the first Knight Rider game wasn't quite the quality product every fan was hoping for. Some hardcore fans couldn't take the horror any longer and gave Davilex their quality feedback. So I read while I was doing some research about the game because I wanted to send Davilex a few questions, questions they never answered and God knows I've waited. Perhaps they simply don't listen to what gamers need. If they did listen and wrote every comment on a sheet of paper then they must have cut it up, burnt the shreds, frozen the ashes and dumped those over the five continents to make absolutely sure that they wouldn't be able to consider even the slightest tip.

Some games have lousy graphics but most of them put at least some effort in making the rendered cut scenes look two or three times better but not Knight Rider 2, that is for sure. I am not talking about plain ugly, these movies are horrifying and if you think that is worse ... then you won't survive the quality of the extra's. Now, I must say that the idea behind the bonus material is very neat: pictures, movies and even a trivia quiz deliver a few minutes of extra value. However, they do have serious problems too: pictures are of extremely low resolution, the blurry movies don't run smooth and the quiz only features about twenty-five question which are in addition hard to read and lousy randomly selected.

Okay, so cut scenes and extra's are graphically bad, but wait until you saw in-game footage: the environments seem to repeat themselves over and over again, there is almost no other (moving or waiting) traffic, no people walking on the side-walk, not even cows grazing in a grassland. If you do happen to stumble on an occasional item that stands along the road then you are devastated by its disgustingly low detail. Even K.I.T.T. doesn't look fly and that is when things do NOT go wrong!

While the dialogs play, subtitles appear (yes, there are subtitles) accompanied with the face of the spokesman. Nice touch, if it wasn't for the fact that his mouth just opens en shuts according to one predictable pattern and thus doesn't correspond with the speech. Truly, a ridiculous sight.

Now, I would give the sound 10 out of 10 only for the renowned theme but then you would probably start thinking the sound is good which isn't the case at all. K.I.T.T.'s scanner sounds like an old telex that worked for forty years with the N.M.B.S (Belgian Railroad company - ed.) and was then shipped of to some god forsaken town in Congo where it had to work intensively for another decade. Guns don't sound impressive either, the engine doesn't make a tough noice, breaking doesn't seem to have a sound-effect at all, voices are plain silly and background noise, well I guess they just forgot about that.

You could state the there isn't a learning curve at all and that everybody can start with this game immediately. But you see, that would be slightly superficial because the gameplay is so unrefined that it even helps to know how it might have been programmed to understand it better. Luckily, it isn't a hard game so the car's incredibly stupid control isn't always to blame for getting killed. Now, on most of the missions you won't find yourself doing so but when you have to take down a legion of robots with a gun that doesn't move separately from your car, it might happen that you have to restart the button-bashing sequence all over again several times.

It is even hard to just drive down a public highway so dodging rockets is almost impossible as the Pontiac doesn't so much turns. It rather kind of slides left and right or spins around but turning... that mathematical formula must have been too complicated. Therefore, I figure you can guess how difficult it is to shoot a small, but quickly moving robot. That makes battles usually come down to shooting as much and as wild as you can after which rushing to a power-generator to recharge K.I.T.T.'s batteries (your life-bar) is the only option. The rest of the objectives only consist of finding all switches to open a gate.

However, the game never got me frustrated and there were several gripping moments, the mission where you have to drive al the way to the top of a factory for example. It is a terrible shame that they didn't make more challenges like these. Even separately: driving games/tests where you have to finish a circuit (with obstacles) within a certain time limit would have been a useful extra mode in great contradiction with the mission mode in which you can play each of the missions separately once unlocked.

As often said, fun things don't last long ... well neither do crappy games I guess because I played through this one in less than five hours. That even includes watching all the videos and photographs, playing the quiz for about twenty times and completing the two first missions again on a higher difficulty setting which I unlocked by finishing the game on normal.

It completely brakes my heart to say this but the sequel fails in every possible aspect. Getting the Knight Rider license is great but far from enough. No matter how renowned a series or movie might be, with worse than ps1 gameplay, sound and graphics and the lack of a multitiplayer (with which they spoil another chance of improving the game) this title is bound to fail. In addition, you have to realise that I didn't even mention all the other problems, bugs and lacks. Things that you thought were no more than obvious in a game released near 2005.

People who downloaded Knight Rider 2: The Game have also downloaded:
Knight Rider: The Game, James Bond 007: Nightfire, Lord of the Rings, The: The Return of the King, RoboCop, Matrix, The: Path of Neo, Mafia: The City of Lost Heaven, Die Hard Trilogy 2: Viva Las Vegas, Judge Dredd: Dredd Vs. Death

From Sep 1982 to Aug 1986, Universal Television aired Knight Rider, an action-based adventure starring David Hasselhoff as a field operative for the Foundation for Law and Government (FLAG), intent on helping the 'innocent, helpless, and powerless' against the criminal element. The real star of the show, however, was a futuristic-styled Pontiac Trans Am, the Knight Industries Two Thousand (KITT), featuring a talking computer. Netherlands-based developer Davilex Games resurrects the characters, cars, and action of the 1980s series, putting the player behind the wheel of KITT in Knight Rider: The Game. 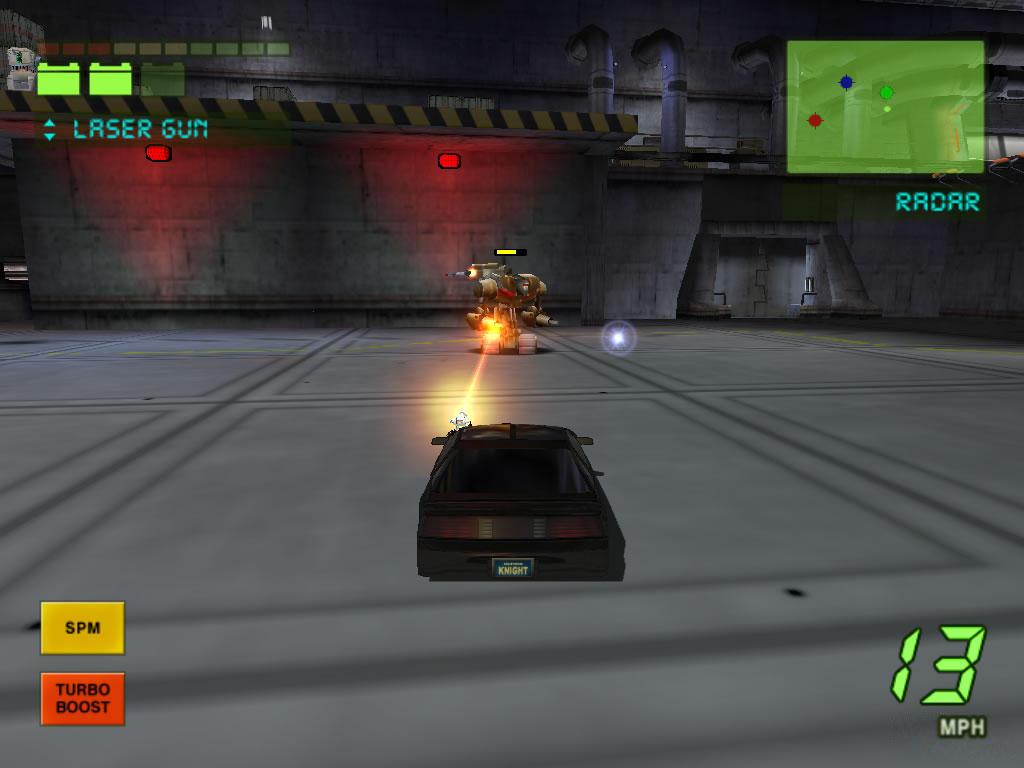