Well, let me tell you what happened yesterday. I had prepaid and reserved a copy of the Gold Edition two months ago at Babbages. Yesterday was the day. The day I had been waiting for months. The release date for the Aliens vs. Predator Gold Edition. I called them around Noon, and asked them if they had it in. They said that they didn’t, and that it wouldn’t be at the store until next week. Aaahhh. After panicking and cursing for almost an hour, I called every store in the area. Best Buy, Target, Wal-Mart, Border’s, absolutely everywhere. I finally found a copy at Electronics Boutique, and told them to reserve it. The only problem was, it was 25 miles away, and I still don’t have a car yet. So after begging my dad to take me, I finally got there, and got my GE. Took over an hour, total.

Now before you ask me why I went to all these lengths to get it yesterday, rather than wait till next week, it was because of two reasons:

I wanted to write this review of Gold Edition for you, the fans.

I’m a hopeless AvP Addict. They should make an AvP Anonymous, because I’d fit into the category.

All right, let’s get right down to the basics. The Gold Edition is the original AvP, the Millenium Expansion Pack, and a Prima Gameplay Guide. The Box’s front is exactly as pictured before, but the back is different, though.

Also, rather than a star field in the main title screen, it is a pulsating egg instead. Spooky.

Now, after nearly a day of continuously playing Gold Edition, here are my thoughts on it.

Nothing much has changed, but instead of the old superiors of the original game in the video screens, it is now the cast of Rebellion playing the Marine senior officers. This is by far the only bad part of the game. They all have British accents, and I can’t believe that all of the United States Colonial Marine Corps senior officers are British-accented. Not convincing US Colonial Marines at all. But other then that, the game is excellent. The graphics have improved a bit.

Also, the marines have two new weapons, the Pistols and the Skeeter. The Pistol can be just in one hand or in two (John Woo-style). Primary fire and secondary fire modes are available for the pistol. “Pistol” and “Pistols” are two different weapons, though. Also, the pistol is much more powerful against AI aliens than I thought. A good headshot will kill an Alien. The Skeeter is a most interesting weapon. It fires a disc that locks on to enemies and kills them with a plasma bolt. Pretty much an instant killer, unless you find a way to avoid it. It explodes after about 5 seconds, or after it fires the plasma bolt. The SADAR, Grenade Launcher, and the Pulse Grenades are more powerful, too. A new taunt for the marine as well. They say “Groovy” (Army of Darkness, baby!). Should have been “Let’s go, marines!”, or some other kickass taunt.

The Predator didn’t get any new weapons, though it is now easier to collect trophies. The old game required you to crouch and use the secondary wrist blade attack on your prey’s head. Now you can stand up and do it. Also the same Rebellion staff on the video screens giving orders to marines as well.

I am pleased to report that the multi-player aspect of the game is a lot better than the original AvP. Rebellion and Fox redesigned the entire multi-player code to eliminate bandwidth hogs in the game. In general, there is less lag, and the strange instances where players float into the air and blow up don’t happen anymore. This is indeed great news for AvP gamers everywhere.

Nine new multi-player maps are available. Most of them are based on the movies. Lab 14, Hadley’s Hope, Elevator, Subway, Leadworks, Meat Factory, Nostromo, Compound, and the Rebellion Office. These are all good maps, and a lot more crawlspaces for an Alien player to hide. The biggest level is Nostromo, which rivals Stranded in size. All modes of play are available in all the new maps, except that there is no cooperative mode in the Rebellion Office. I’ve played on all of these levels; they are good maps to play in.

Rebellion also included a custom map folder for user made levels, so when PREditor is fully developed with level editing features, as long as all of persons playing have the same map, you can play multi-player games in the new maps. Cool feature.

Also, when loading the multi-player session, it will tell you what level you will be in, and what weapons are disabled. Also, auto-switching weapons may be turned off as well.

You can play the GE with GameSpy Arcade, MPlayer, Wireplay, FragFinder, and the Static-patched AvP GE dedicated servers. I happened to play with Fox Interactive’s Elite QA Team (Pezman, IgorK, SIN-P-KILLJOY and soup) at GameSpy Arcade to give GE a test run. It was the best multi-player gaming I have had with AvP, ever! Even though the Fox team whooped me, I showed them a few suprising moves, too…

Unfortunately, you cannot play people who only have the original game. The multi-player coding is different. You cannot even play the original multi-player levels with them. Why? Because the GE players have access to weapons that the original players don’t have, and again, the multi-player coding isn’t compatible. However, there is a workaround for this. If you already have the original game installed, simply install GE in a directory other than the default one. Instead of C:Program FilesFoxAliens versus Predator, install the GE instead into C:Program FilesFoxAliens versus Predator Gold Edition. That way you will have both the original and Gold Edition on your computer, and you can play with people who have either, as when they launch, it will launch the correct game.

The Gold Edition, the Millennium Expansion Pack, and the forthcoming Macintosh version of GE will be compatible for multi-player gaming.

This new edition of AvP simply rocks. A much improved multi-player experience, with more places to play, better levels, and more importantly, less lag! I give this new version of AvP two big thumbs up in terms of improvement of multi-player performance. And with dedicated servers, the source code (mods!) and a level editor all recently released, Half-Life may be seeing a little competition soon…

Big thanks go out to Pezman, IgorK, SIN-P-KILLJOY, and soup for allowing me the honor of playing GE with them.

So, what are you standing there for, Marine?! Get the Gold Edition, ASAP!

Hi guys. This was an excellent game for its day. The original PC version needs windows 98 and this Mac version needs a PPC cpu Mac ( 1999-2000) ie a G4 running OSX leopard or Tiger.
Otherwise its emulation to get it to work. 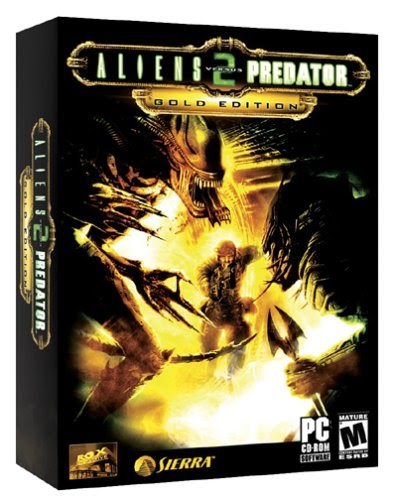 Dude this thang doesnt really work. It requires a very VERY complicated way of getting it to work. Honestly the game is good not great, but its started to become a quest of mine to get and play this game...if you have a newer mac it wont work, youll basically have to get a mac emulator, on your mac, because the game is SO old. It kinda emulates a windows 98 mac

Honestly this game is fun and I hope the download works :P

Aliens Versus Predator: Gold Edition is available for a small price on the following websites, and is no longer abandonware. GoG.com provides the best release and does not include DRM, please buy from them! You can read our online store guide .

Some of these file may not be included in the game stores. For Aliens Versus Predator: Gold Edition, we have the following files: